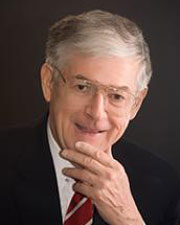 Rud Turnbull, a self-described student of the human condition in a disability policy context, is a researcher, teacher, consultant, and advocate in the field of developmental disabilities. With his wife Ann, he is co-founder and co-director of the Beach Center on Disabilities. He is a Distinguished Professor, in special education, and has been courtesy professor of law, at the University of Kansas. His research has addressed nearly 20 different issues of disability policy and has qualified him to be an expert witness before Congressional committees and draftsman of state and federal statutes, regulations, and proclamations. Until January 7, 2009, he was the father of Jay Turnbull (died at age 41), who had an intellectual disability, autism, and emotional-behavioral challenges. He has served as chairman of the board of trustees of the Judge David L. Bazelon Center for Mental Health Law; president, American Association on Intellectual and Developmental Disability; chairman, American Bar Association Commission on Disability Law; secretary, The Arc of the United States; and treasurer, The Association for Persons with Severe Disabilities. His received peer recognition as one of 36 people who, in the 20th Century, “changed the course of history in mental retardation” and, during the 19th and 20th Century, as one of the leaders of the field of special education. He is a graduate of Kent School, Kent, CT; Johns Hopkins University; University of Maryland Law School; and Harvard Law School (post-graduate degree).