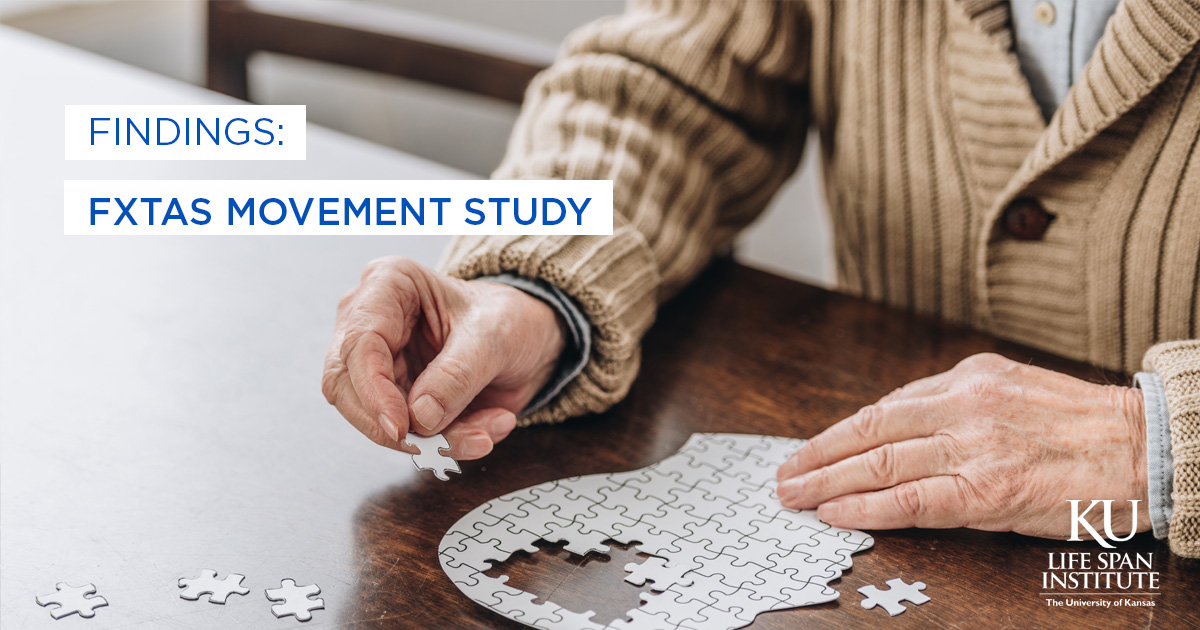 The neurological disorder FXTAS (pronounced “fax-tas”) stems from a genetic premutation seen in one of every 151 women and one of every 468 men, called the FMR1 premutation.

Just 15 years ago, Fragile X-associated tremor/ataxia syndrome (FXTAS) was discovered by Randi Hagerman, a doctor who saw many of her Fragile X syndrome patients had grandfathers with a tremor, according to the National Fragile X Foundation. These older relatives eventually were found to have the FMR1 premutation, and many showed neurological symptoms akin to Parkinson’s disease or early-onset Alzheimer’s disease.

But much remains to be discovered about FXTAS. For instance, there’s not much understanding of quantitative symptom traits in aging premutation carriers to help identify neurodegeneration. Not all FMR1 premutation carriers go on to develop FXTAS, however, and researchers argue that early markers of disease onset will help identify patients who could benefit from earlier diagnosis and treatment.

Now, in research just published in Frontiers in Integrative Neuroscience, a research team headquartered at the University of Kansas’ Life Span Institute used a grip-force test to analyze sensorimotor function (roughly akin to hand-eye coordination) in people with the FMR1 premutation, with the aim of determining FXTAS risk and severity.

“What will happen is there’s a kinetic tremor, a shaking of the hands, as these folks try to reach for objects or try to do some sort of coordinated action,” said Walker McKinney, lead author and doctoral student of clinical child psychology at KU.  He performed the paper’s research at KU’s BRAIN Lab headed by Matt Mosconi, associate director of the Life Span Institute and associate professor in the Clinical Child Psychology Program. “Some also have problems with walking and balance. On top of that, some have significant cognitive difficulties and psychiatric symptoms. So, they’re at risk for higher rates of depression, anxiety and cognitive decline.”

But in many carriers of FXTAS’ FMR1 premutation, the symptoms are quite subtle.

“There’s a huge challenge in the field in that that we have no way of predicting who’s going to go on to develop the disease and who will still remain healthy or won’t show any signs of the disease,” McKinney said. “We were interested in looking at really quantifiable, really precise measurements of their behavior — to see if people who didn’t think they had the disease were maybe showing some symptoms of early decline that wouldn’t have been detectable by neurologists or by their doctor, or even noticed by themselves. So, we recruited people who really didn’t think anything was wrong with them.”

McKinney and colleagues used a precision gripping test, where 26 participants with the FMR1 premutation and 31 control participants without the premutation were asked to manipulate bars on a video screen by squeezing a device. The researchers measured the speed and accuracy with which individuals pressed.

“To begin with, they didn’t think they were showing any signs of the disease,” McKinney said. “They received genetic testing to confirm that they were premutation carriers — and also underwent a neurological evaluation. And while some of them showed no symptoms, some showed mild signs of the disease and some even showed more moderate symptom levels. But, none of them had been identified as having FXTAS, and none of them reported having any concerns  — they just assumed changes in their motor abilities were part of normal aging. But then, as we sat them down and did this laboratory testing, and measured their precise motor behavior, some of them were actually showing detectable and significant motor deficits.”

According to the researchers, “The premutation carriers were slower to start pressing, and then when they pressed, they increased their force at a slower rate. Then, when they tried to maintain a steady grip, they struggled to precisely and rapidly adjust their force when the bars they were watching moved further apart. These motor problems were associated with more severe FMR1 gene premutations and more severe clinically rated FXTAS symptoms suggesting that they may be indicators of who will or already has started developing the disease.”

This work was led by McKinney and Mosconi and involved multiple collaborators including Shannon Kelly, KU graduate research assistant at the Life Span Institute and doctoral student at the Clinical Child Psychology Program; Zheng Wang of the University of Florida; Pravin Khemani of the Swedish Neuroscience Institute; Su Lui of the West China Hospital of Sichuan University, and Stormi White of the Emory University School of Medicine.

The researchers focused on an area of the participants’ X-chromosomes called the FMR1 gene and specifically at the cytosine-guanine-guanine (CGG) trinucleotide sequence on this gene. Individuals typically show 5-50 CGG repeats on the FMR1 gene, but FMR1 premutation carriers show 55-200 CGG repeats, and full mutations of the FMR1 gene involve more than 200 CGG repeats and cause Fragile X Syndrome – the most common heritable form of intellectual and developmental disabilities. Individuals with FMR1 premutation alleles are at risk for having a child with Fragile X Syndrome and for developing FXTAS as they age. But, which premutation carriers will develop FXTAS remains a mystery, and many cases are missed.

“With some of the motor measurements, we were able to run correlation analyses and see how our motor measurements related to the length of people’s premutations, or the number of CGG repeats,” McKinney said. “We saw the longer an individual’s CGG repeat region was, the less complex their motor output was. We want the signal to be nice and complex —  if somebody is producing force, we’d like the signal to be irregular, we want them to be taking in all the visual, tactile and other sensory information and constantly updating their motor behavior to be precise. Unfortunately, in our sample, people who had longer CGG repeat lengths had the less-complex signal, which is more characteristic of a tremor —  perhaps even a detectable sub-clinical tremor the participant isn’t even aware of yet.”

Researchers in the BRAIN Lab at KU now are recruiting individuals with and without the FMR1 premutation between the ages of 50-80 years for a follow-up study that also will help determine the brain mechanisms associated with the motor problems they are studying. Those interested in participating in the next phase of this research should email  brainlab@ku.edu or visit http://brainlab.ku.edu/.