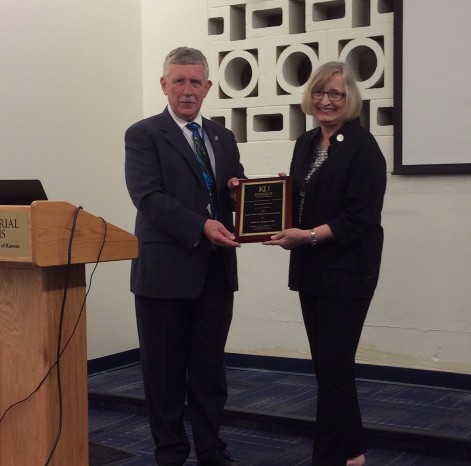 Susan Palmer, research professor at the Beach Center on Disability and a courtesy professor in the Department of Special Education, has been named the 2016 recipient of the Steven F. Warren Research Achievement Award. The award is the highest honor given to a full-time academic staff researcher working in a department or research center on KU’s Lawrence campus and includes $10,000 in research funds.

Palmer’s research focuses on self-determination of youth and young adults with disabilities. She was nominated by Michael Wehmeyer, Ross and Mariana Beach Professor of Special Education and director and senior scientist of the Beach Center on Disability, with support also coming from Karrie Shogren, associate professor of special education and associate director and senior scientist at the Beach Center.

“Susan is a national leader in her field,” said James Tracy, vice chancellor for research. “Her innovative research on self-determination and the development of the Early Childhood Foundations Model for Self-Determination have made extraordinary contributions to her profession.”

According to Wehmeyer, Palmer is the leading scholar in the world in the field of self-determination. “Dr. Palmer has engaged in pioneering research examining developmental milestones for young children with disabilities pertaining to foundational skills for later self-determination, including the development of self-regulation, choice making, problem solving and engagement,” he said.

Palmer came to KU and LSI in 1999 as a research assistant professor. Her research has been funded by the U.S. Department of Education’s Institute of Educational Sciences and she has held national leadership positions with the American Association on Intellectual and Developmental Disabilities (AAIDD), most recently as president. She has received awards for her research from AAIDD and the Council on Early Childhood’s Division on Autism and Developmental Disabilities. She earned her Ph.D. in human development and communication sciences at the University of Texas at Dallas in 1989.

The KU Research Achievement Award was established in 2006 and renamed in honor of Steve Warren in 2014. Warren was director of LSI from 2001 to 2008 and vice provost of research and graduate studies from 2007 to 2014.. See related story, Warren appointed university distinguished professor.